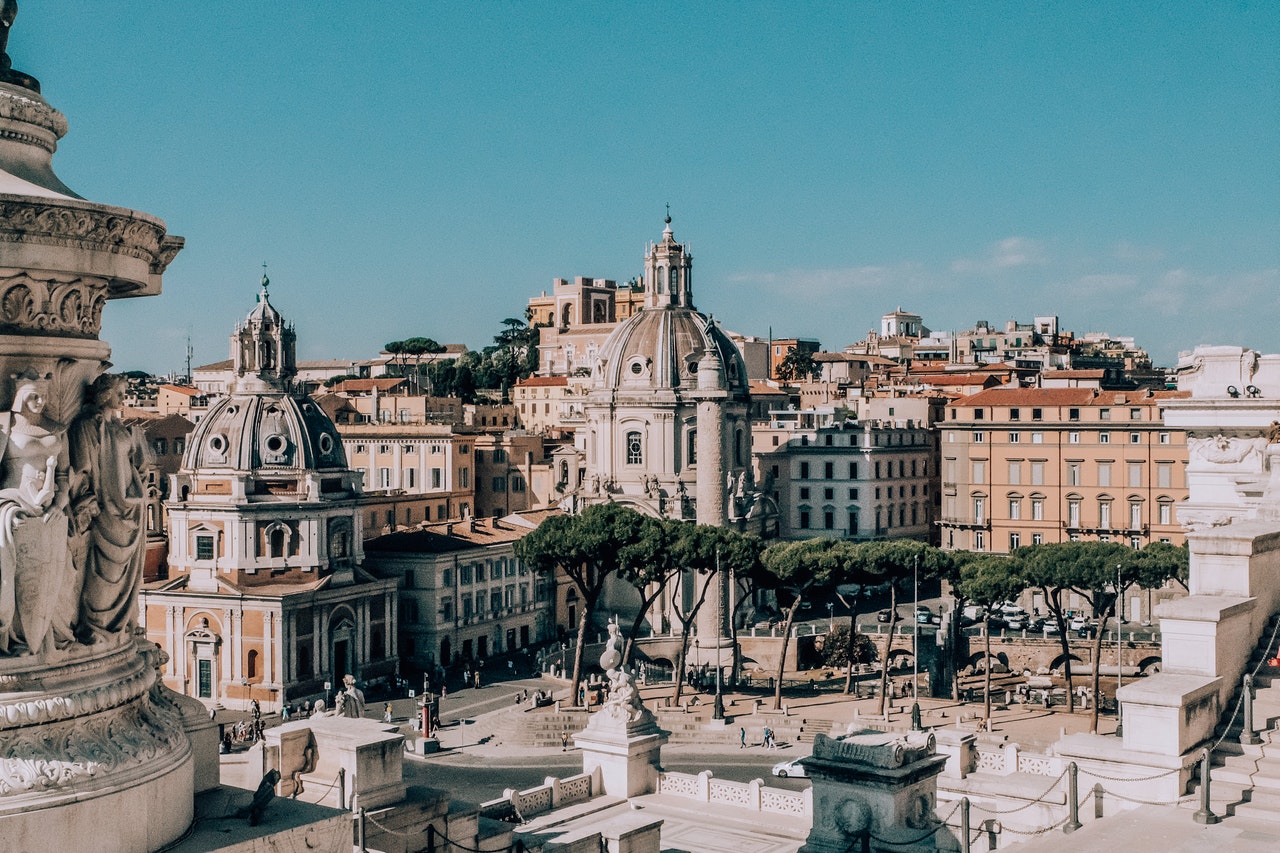 The origin of Valentine’s Day dates back to the 3rd century Rome with the execution of a priest called Valentinus, known today as St. Valentine. Every February 14th, millions of people across the globe give their loved ones heart-shaped cards and sweets to show their love and affection. Yet this holiday, which has grown into the 20 billion dollar business that it is today, has a not-so-lovey beginning. Although no one knows the full story of how the holiday began, several theorists have put together points in history to explain the story.

We’ve taken a deep dive into the roots and past of Valentine’s Day, and we’ve gathered up all the myths and stories (some darker than others) to trace the romantic event that it is today.

Who is St. Valentine?

The two most prominent Saint Valentines were the Roman priest and the Italian bishop. The priest named Valentinus was imprisoned for his belief and held in prison. Valentinus made a bet with the man who guarded him, that if he could cure his foster-daughter of blindness, he would convert to Christianity. The legend states that Valentinus was able to make the girl see and that the guard and his whole family became Christians. When the emperor learned the news, he ordered all of them to be executed.

The second Valentinus went into a similar situation; he argued with a possible convert and ended up healing his son. He was executed by the same emperor Gothicus, as well as by the man he had converted. Some claim that these men are two versions of the same story, but no one knows who the real St. Valentine was.

As time progressed, the legend of these martyrs grew into a Christian festival of their death. It is believed that the Catholic Church may have initially founded St. Valentine’s Day to commemorate those men who believed they were martyrs.

In medieval legends, and also depicted in contemporary culture, St. Valentine was secretly marrying lovers to protect young men from going to battle. Other legends claim that St. Valentine fell in love with the blind girl he had cured and that he wrote her the first Valentine while in jail. Before his passing, he is said to have written to her a letter signed “From your Valentine,” a phrase that is still in use today. However, there is no historical evidence to support these stories.

Others claim that the Christian Church had agreed to celebrate St. Valentine’s Day in the middle of February to cover up the ancient holiday of Lupercalia, also known as the Fertility Festival.

Lupercalia was initially a religious assembly of Roman priests from the 13th to the 15th of February. Equally odd was the tradition of women putting their names in the urn for bachelors to choose from. The name of the woman they drew would be their match for the remainder of the festival, and sometimes couples would wed!

So, what’s the true story of Valentine’s Day? Lupercalia was finally outlawed. However, at the end of the 5th century, Pope Gelantis proclaimed 14 February the day of St. Valentine’s Day, ridding the day of the unruly festival. Whether or not this activity was meant to cover up Lupercalia is debated by historians.

THE HISTORY OF LOVE ON VALENTINE’S DAY

Valentine’s Day’s first formal reference to romance eventually appeared more than a thousand years after the martyr’s death, when Geoffrey Chaucer, a medieval author, ordered the feast of St. Valentinus in February to be connected to the mating of birds. English birds mated in February and soon after Chaucer’s reference in his “Parliament of Foules” European nobility started to deliver love notes during the birds mating season. Soon after, Shakespeare’s love, Ophelia, renamed herself Hamlet’s Valentine. Chaucer and Shakespeare’s holiday romanticism in their work quickly started to attract popularity in Britain and the rest of Europe.

So, how did we get around to celebrating Valentine’s Day with roses, chocolates, and messages of love when it began from such a dark beginning?

As we discussed, for thousands of years, mid-February was widely popular for fertility festival celebrations, so it’s no surprise why romance is synonymous with a holiday. Whether or not Chaucer and Shakespeare can be entirely attributed, there is no doubt that the existing associations around the day have become common. Even, people want to send flowers on special occasions or to express feelings of affection and appreciation. Such modern symbols of Valentine’s Day include chocolates, candy hearts, and gifts, as well as roses.

Notes, Gifts, and Chocolates, Oh My!

It became popular for friends and lovers in the 17th century to share small presents and handwritten notes in Britain. Eventually, tradition worked its way to the New World, and in the 19th century, along with the Industrial Revolution, factory-made Valentine’s Day cards rolled in. Cheaper postage costs have contributed to the rise in popularity of Valentine’s Day greetings and Esther A. Howland was a pioneer in mass-producing the first valentines made of lace, ribbons, and colorful pictures. Soon she became known as “Mother Valentine.”

The first chocolate package was created by Richard Cadbury, who began packing chocolates in fancy boxes to boost sales. He produced the first heart-shaped chocolate box in 1861, and today more than 36 million heart-shaped chocolate boxes are sold each year. Boston pharmacist Oliver Chase has created the first candy hearts as prescription lozenges used for sore throats. Words like “Happy Valentine’s Day” and “Sweetheart” were not published on candies until much later.

Where did the flowers and flying baby come from?

Since fertility was also associated with agriculture, flowers were a gift of choice for Valentine’s Day. Flowers have symbolized fertility, love, marriage, and romance for decades. The history of offering your loved Valentine’s Day flowers starts from the old-fashioned custom of sending floral bouquets to carry out non-verbal messages. Introduced in the 18th century by Charles II of Sweden, each flower had a particular meaning added to it, making it possible to have a complete conversation using only flowers.

As far as Cupid’s importance is concerned, in Roman mythology, he was the son of Venus, the goddess of love and beauty. He was known to fire arrows at both gods and humans, making them quickly fall in love with each other. It’s not exactly sure why he became synonymous with the holiday, but it’s clear that his concept has become important. Look out for the bow and the arrow!

According to the U.S. Greeting Card Association, approximately one billion Valentine’s Day Cards are sent worldwide each year, making it the second-largest card-sending holiday. Take a look below at some interesting Valentine’s Day information and often asked questions about Valentine’s Day history!

Is Valentine’s Day only meant to be celebrated between couples?

Valentine’s Day has become an annual holiday to celebrate all kinds of relationships! This can mean expressing how much you love your family members, your co-workers, your little ones, or your furry friends.

What to gift on Valentine’s Day?

Whether it’s your first Valentine’s Day together or your 20th, it can be a difficult task to pick a gift for your special someone! To support, we’ve developed Valentine’s Day gift ideas for every level of your relationship!

Have we been excited about Valentine’s Day? Although the past of Valentine’s Day is not always chocolates and flowers, we are happy to have a day devoted to expressing love for others! Every love matters so this year, don’t forget to send a message to your mum, give a present to your colleague, and show some extra love and gratitude to a friend who needs it. Get one romantic flower bouquet for your loved one Today!

About Us
My Fair Lady is aspired to become a trend-setter that make flowers giving a 360-degree turn by bridging traditions with innovation. With a splash of creativity and innovation, we can make flowers giving beas chic and trendy, or as elegance and poise as you desire it to be, spicing up your special occasions, festive celebrations and various events throughout the year.
Links
Promotions
My Account
Privacy Policy
Terms & Conditions
Contact Us
My Fair Lady : Florist & Decoration Malaysia. All Rights Reserved
Follow Us
0
0
Your Cart
Your cart is emptyReturn to Shop
Continue Shopping
Whatsapp Us