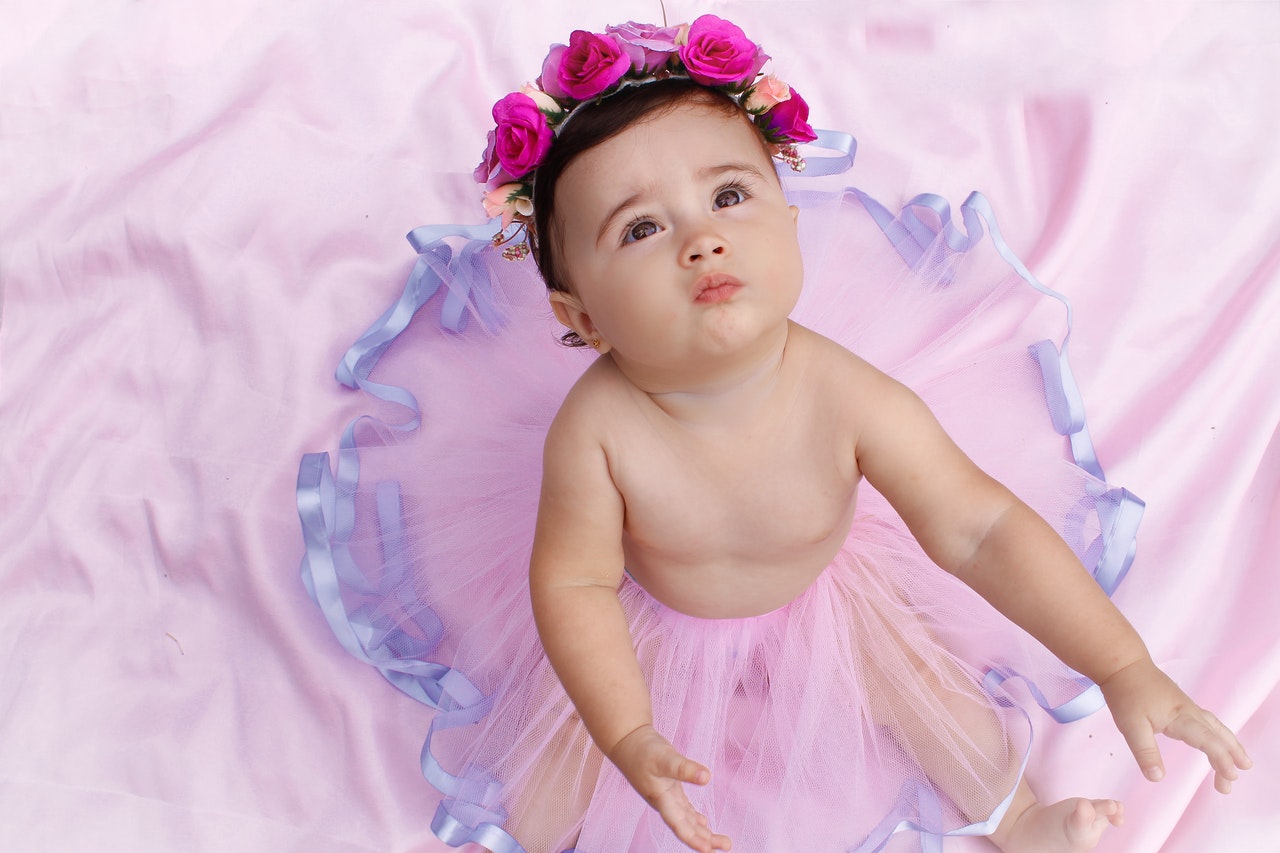 This English name is a symbol of purity and innocence, which is how your tiny babe joins the world. If you choose anything more formal, Lily might be a nickname for Lillian or Lilliana. Lily is one of the most common baby names in England and Wales at the moment.

This charming Latin botanical name has a plethora of variants. Your daughter could be called Rosetta, Rosalie, or Rosemary, and you could call her Rose for short. However, we like the idea of a little girl called Rose, also known as Rosie. Lily-Rose Depp, the daughter of Johnny Depp and Vanessa Paradis, is a lovely mix of the first two names on this list.

Leilani is a beautiful name for the baby girl you adore. It means “heavenly flower” in Hawaiian. Only make sure you take her to Hawaii at least once in her life.

Who wouldn’t like to be named after such a happy flower as a French name that means “daisy”? If you’re considering naming your child Margaret, maybe this would convince you to go for the French version?

A delicate-sounding name that translates to “flower.” Fleur is of French origin (obviously! ), so if you want to stand out, go for Fflur, which means flora in Welsh. Fleur was the name of the adorable skunk in Bambi, as well as one of our favorite Harry Potter wizards.

This name means “a flower” in English, but this isn’t your usual bloom. It’s a vivid pink name that’s great for your brave little girl. Since azaleas bloom in the spring, we think this is a fine name for a May baby.

This name is derived from the sweet alyssum flower and means “rational” in Greek. Alyssa Milano has become a household name, first as an actor, and then as one of the people leading the #MeToo campaign. You may be dealing with a fierce feminist as well.

The delicate and fragrant essence of this tiny white flower is well known. Princess Jasmine from the Disney classic Aladdin is one of the most famous bearers of the word.

This lovely Greek name means “cinnamon,” which is also the sweet and spicy fragrance that the cassia plant emits! As with the cassia flower, this name can be pronounced cass-ee-a or cash-a.

You may be shocked to discover that this Scandinavian name often applies to a genus of over 800 different Ericaceae species. Erica means “heather” in Latin, literally “winter and spring heather.”

Zinnia is a Latin flower that represents remembrance and is cool and edgy. Roald Dahl knows a good name when he sees one—Zinnia Wormwood is the mother of Matilda in his popular novel of the same name, and her name is pretty cool, even though she has a questionable personality.

This Greek name is great for your little star because it means “star.” Aster flowers resemble daisies that come in bold colors such as magenta and purple. This flower is also used to attract butterflies.

Iris was the Greek goddess of the rainbow, who rode it from heaven to earth as a bridge. She was described as a sign of majesty and power—as all girls should be, right?

The cheery orange-and-yellow flower is also used as a sign of the Virgin Mary, and this English name was very common in aristocratic families. It’s an outstanding choice whether you want to remember a parent or grandparent with the name Mary or Maria but want something a little different.

Because of the poem “In Flanders Fields,” this Latin name means “flower,” and the plant itself symbolizes remembrance. The poppy, on the other hand, maybe a sign of beauty, achievement, and creative imagination. The poppy’s sap has a sedative influence, so the Ancient Greeks assumed the flower embodied sleep. Is it true that naming your baby Poppy would guarantee that she sleeps well?

Bryony means “to sprout,” like white briony vines do as they expand wildly upwards (and are slightly destructive, much like a toddler in a recently cleaned house). Brian is a Latin word that is written with an “ee” at the end.

This English name, which means “first rose,” has a delicate quality to it, as it reflects young love in flower language. Red, yellow, blue, blue-purple, white, and cream primroses are among the many colors available. In The Hunger Games trilogy, Katniss’s younger sister Primrose is a well-known character.

What a wonderful name for a vibrant little girl. Since a fresh daisy represents the sun and means “day’s eye” in Old English, don’t be surprised if your little daisy grows up to shine.

This broad and lovely perennial comes in several bright colors, including purple and red. Dahlia is a Scandinavian name originating from the word “valley.” Dahlias reflect beauty and integrity in Victorian flower lore, but they’re also a reference to the enduring bond of commitment

Welcome your baby Heather into the world and watch her flourish, much like this purple flowering rose. This plant flourished in Scotland’s desolate fields, giving life to the rocky grounds.

All who has met a Holly has said, “Are you a Christmas baby?” Holly bushes are known for their bright red berries, which make them easily identifiable and famous throughout the holiday season. The word “holegn” derives from an Old English word that means “to prick.”

Ivy wreaths were granted to newlyweds in Ancient Greece to symbolize their devotion to one another. The Old English name still stands for faithfulness today. We’re optimistic that your little Ivy will be just as elegant and chic as Blue Ivy Carter.

It’s time to light some sage and welcome your new baby girl into a safe, peaceful world. This Latin name means “wise,” and it is believed that your kid will grow up to be wise.

The cedar tree is said to be the lair of powerful gods and can also bind you to other worlds! People used to purify themselves by burning cedar. This French name appeals to us because it is unisex.

Surprisingly, this fragrant herb has the potential to grow tiny flowers. This lovely Greek name means “regal” and is unquestionably appropriate for your little prince.

Ren is a lovely name for your son. It means “water lily” in Irish and “lotus” in Japanese. In ancient Egyptian civilization, the holy lotus flower was a symbol of rebirth, and Buddhists consider it as a sign of spiritual awakening. Ren from the film Footloose, who you might say found rebirth through dance, is one of our favorites.

This name, which means “rose” in Hebrew, is ideal for your precious little one. Supernatural’s Jared Padalecki (and Dean for Gilmore Girls fans) is a star with this new nickname.

Baby-names with indigo shades (like Blue Ivy) are very common right now. The deep-blue dye produced by the indigo plant is the source of this name. It’s eye-catching on both a girl and a guy.

This name is derived from Old French and German and means “reddish-brown fur.” So, if you’ve settled on a baby name but your little one has copper-colored fur, Sorrel may be a good alternative. A flowering sorrel is a kind of hibiscus, which can be used to produce teas and other beverages.

Sweet William is available in white, pink, purple, and red, and grows in lovely clusters. Who’d have guessed Prince William’s German surname was so floral?

Kunal means “lotus” in Sanskrit, or “someone who sees beauty in everything.” That comes as no surprise, as the lovely lotus flower stands out even in the murkiest of ponds. Kunal Nayyar, who plays Rajesh Koothrappali on The Big Bang Theory, is one of our favorite stars.

About Us
My Fair Lady is aspired to become a trend-setter that make flowers giving a 360-degree turn by bridging traditions with innovation. With a splash of creativity and innovation, we can make flowers giving beas chic and trendy, or as elegance and poise as you desire it to be, spicing up your special occasions, festive celebrations and various events throughout the year.
Links
Promotions
My Account
Privacy Policy
Terms & Conditions
Contact Us
My Fair Lady : Florist & Decoration Malaysia. All Rights Reserved
Follow Us
0
0
Your Cart
Your cart is emptyReturn to Shop
Continue Shopping